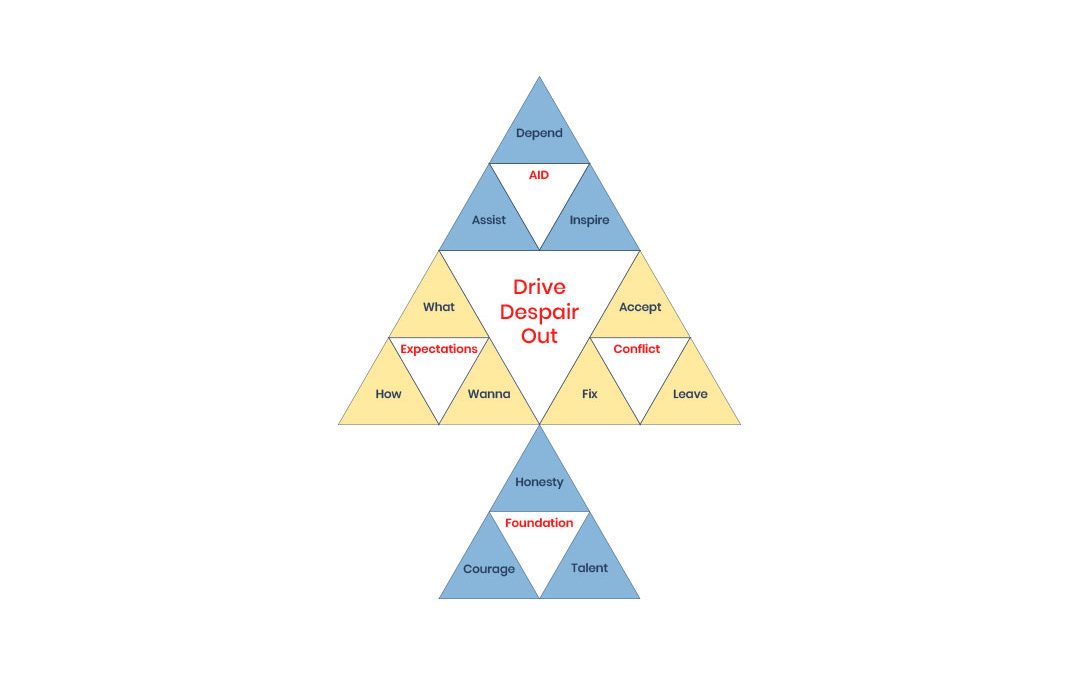 If leadership is defined by style, then how did so many great leaders arise with so many different personalities and styles? Was General Patton similar in style and personality to Gandhi? Did Winston Churchill and Dr. Martin Luther King share those traits? Was Nelson Mandela a lot like General MacArthur? Obviously not. So, what is it about leaders that make others want to follow them?

To answer that question, it is necessary to look beyond personality and style to see what it is that all these leaders DO. After a career in military, civilian, and government service I wondered what it was that the leaders I respected and admired did that “leaders” I wanted avoid at all costs didn’t do. When I finally looked at things the good leaders did and bad leaders did not do, I composed the Power of 3 Leadership Paradigm to help others who want a career of leadership to be more successful and have a tool to assist them through the challenges they would inevitably face. Below is a pictorial representation of that concept.

There are three areas a leader must master to become effective. These are the foundation, challenges, and achievement. Each is important and each depends on the strength of the previous one to assure success in the subsequent areas as one moves up the paradigm from bottom to top.

Anything being built requires a foundation. This is equally true with a leadership career as a building. All the great buildings you know have a strong foundation and all the leaders you admire and respect have one too. The Power of 3 Leadership foundation is composed of three parts – honesty, courage, and talent. Without them, catastrophic failure is assured.

Honesty is the ability to see the world and your situation in that world THE WAY THAT IT IS. Not the way you WANT it be, not the way you think it SHOULD be, not the way that you think it COULD be if things were different. The way that it is. Scott Peck in his book “The Road Less Traveled” describe a map that every person has that represents how they see the world and their place in it. A leader must nurture their map and share it with others in order that they may learn from the leader’s map and the leader can learn from their maps. You must know where you are before you can figure out how to get to where you want to be.

Courage consists of three things – the ability to overcome fear, acting to benefit others, and the willingness to do so without regard to the cost to oneself. Everyone can think in terms of a soldier diving on a grenade in combat to preserve the lives of comrades. However, courage is shown in many ways without the necessity for forfeiting a life. All it takes is for a leader to practice it, observe it in others, and praise it in public to activate this powerful foundational tool in themselves and others.

Talent is a self-evident requirement. Every great leader started out being good at something whether that was playing a sport, running a business operation, creating a political movement, or some other field of endeavor. Talent is composed of three things – knowledge, skill, and perseverance. People forget that Michael Jordan didn’t make the varsity basketball team as a freshman despite his knowledge and skill. He never let the lack of perseverance limit him again.

Of these, three talent is the least important. If you examine failures in leadership in your own experience or others, you will seldom find a case where lack of talent is the primary cause. It should not be surprising given that we focus so much energy on talent development in formal education and training, but comparatively little on honesty and courage.

There are three types of challenges every leader must deal with. These are unmet expectations, ethical conflicts, and despair. Each involves creating an environment where these challenges can be overcome for the team to move forward to the next level – achievement.

Unmet expectations are the most common problem leaders face. However, it is relatively simple problem with which to deal. When an expectation is missed, there are only three possible reasons – someone didn’t know WHAT to do, someone didn’t know HOW to do it, or someone didn’t WANNA do it. The trick is to realize that the leader is responsible for WHAT and HOW, the follower is responsible for WANNA. Unless the leader fixes any issues with WHAT or HOW, it is unlikely that the expectation will be met. The resources, material, training, practice, and time allowed must align for the follower to be able to accomplish the HOW part. If they are not, it is up to the leader to fix it or change the expectation to match the circumstances that exist (see honesty discussion earlier).

Ethical conflicts arise from a requirement to do something that clashes with the fundamental ethical core of a follower. The degree of the conflict will depend on the nature of the clash. When ethical issues arise, everyone suffers and bears the scars of the occasion regardless of the outcome. There are three potential ways to deal with these conflicts and each has a down side. The means of dealing with conflict are – fix it, accept it, or leave it. It is up to the leader and each individual to decide which path they can attempt/tolerate. The serenity prayer comes into play in these cases. “God grant me the courage to change the things I can, the serenity to accept the things I cannot change, and the wisdom to know the difference.”

One other option exists. Don’t fix it, don’t accept it, and don’t leave it. Just stick around and bitch about it. Everyone knows a person like this in their jobs at some point. They are a cancer to the organization and a cancer to themselves. The only viable option for cancer is excision.

The last challenge for leaders is to DRIVE DESPAIR OUT. Despair is the opposite of love. The opposite of love is not hate, it is despair. Love is a deeply felt emotion that compels action toward others for their benefit. Despair is a deeply felt emotion that PREVENTS action toward others. It is the shutdown button on your soul. You cannot lead in despair and your followers cannot follow when they are in despair. The leader must drive despair out of themselves as well as their followers to succeed.

Once the foundation is strong and the challenges met, the leader gets the chance to achieve. There are three things the leader must do to achieve. These are included in the acronym AID. A is for assist. I is for inspire. D is for depend.

The primary job of a leader is to assist others to succeed. If the leader could do everything themselves, there would be no need to assist. But leaders exist specifically because they CANNOT do it all. Assisting others is the path to magnifying the impact of the leader’s competence so others can achieve more than the leader alone.

Depending on others is a natural consequence of having followers. If the leader could do everything, there would be no need for followers. However, it is human nature not to accept blame for failure and it is human nature to like acclaim for successes. The leader gets both whether the leader is directly responsible for the outcome or not. This is a harsh truth that leaders must accept. The exceptional leader only accepts credit on behalf of the team that achieved the goal. Also, the exceptional leader accepts the blame for failure and resolves to fix the failure and perform better in the future without blaming the followers.